An App is a multi-container resource which can be deployed to multiple fleets. Apps are intended to offer standalone functionality and can be constructed entirely or partially from blocks. Apps are designed to facilitate functionality sharing between both public and private fleets. They can be published on balenaHub in order to allow other users outside of your balenaCloud organization to install and utilize them on their own fleets. Apps can exist independently to solve for a complete use case.

What can Apps be used for?

Apps are a way to group together multiple containers that are deployed to a fleet of devices together in order to perform a complete function. They differ from blocks since they are intended to work standalone and do not require any further development or external containers to function for their use case.

Apps exist today for those developers who wish to share what they have built on balenaHub in order to enable deployment to other fleets owned by other people using balenaCloud. Apps are created within balenaCloud, releases are pushed in the exact same way as with fleets, and then they can be marked public to publish them on balenaHub and share with others. In this manner, one App can be installed on multiple fleets.

An example of an App constructed in this way is balenaSense. BalenaSense is built from the dashboard and connector blocks along with some additional containers. An App such as balenaSense could be deployed to a fleet to create an air-quality monitoring network, for example.

If you’ve previously worked with fleets on balenaCloud, the process of creating an App and deploying a release is very similar.

In order to create your own App, the code needs to be in a public GitHub repository. When an App is deployed, the latest code is pulled from GitHub. This will change in the future as and when we add support for private apps. The App has to include a balena.yml file in the root directory of the project. Here's a balena.yml file of balenaDash for reference:

Next, navigate to the Apps tab in the sidebar and click the Create App button in the balenaCloud dashboard. Fill the details for your App in the modal, and click Create new app button to create your App. Next, we need to push a new release to your newly created App on balenaCloud. If you are new to this, then follow the Getting Started guide.

Publishing an App on balenaHub

By default, Apps that you create within the balenaCloud dashboard are private and only accessible by the owner along with any other teams or members that you explicitly grant access to. When you are ready to release, head to the Settings tab in the sidebar and add your App’s GitHub repository to the Repository URL section. Next, toggle the App visibility button to on for your App to be visible on balenaHub. You’re free to toggle the visibility on and off as necessary at any time.

Apps marked with visibility set to ‘on’ in the dashboard will be made available as another resource for the community on balenaHub. Users can deploy Apps from balenaHub to their own fleets managed in their own balenaCloud accounts using the Deploy button with each App. 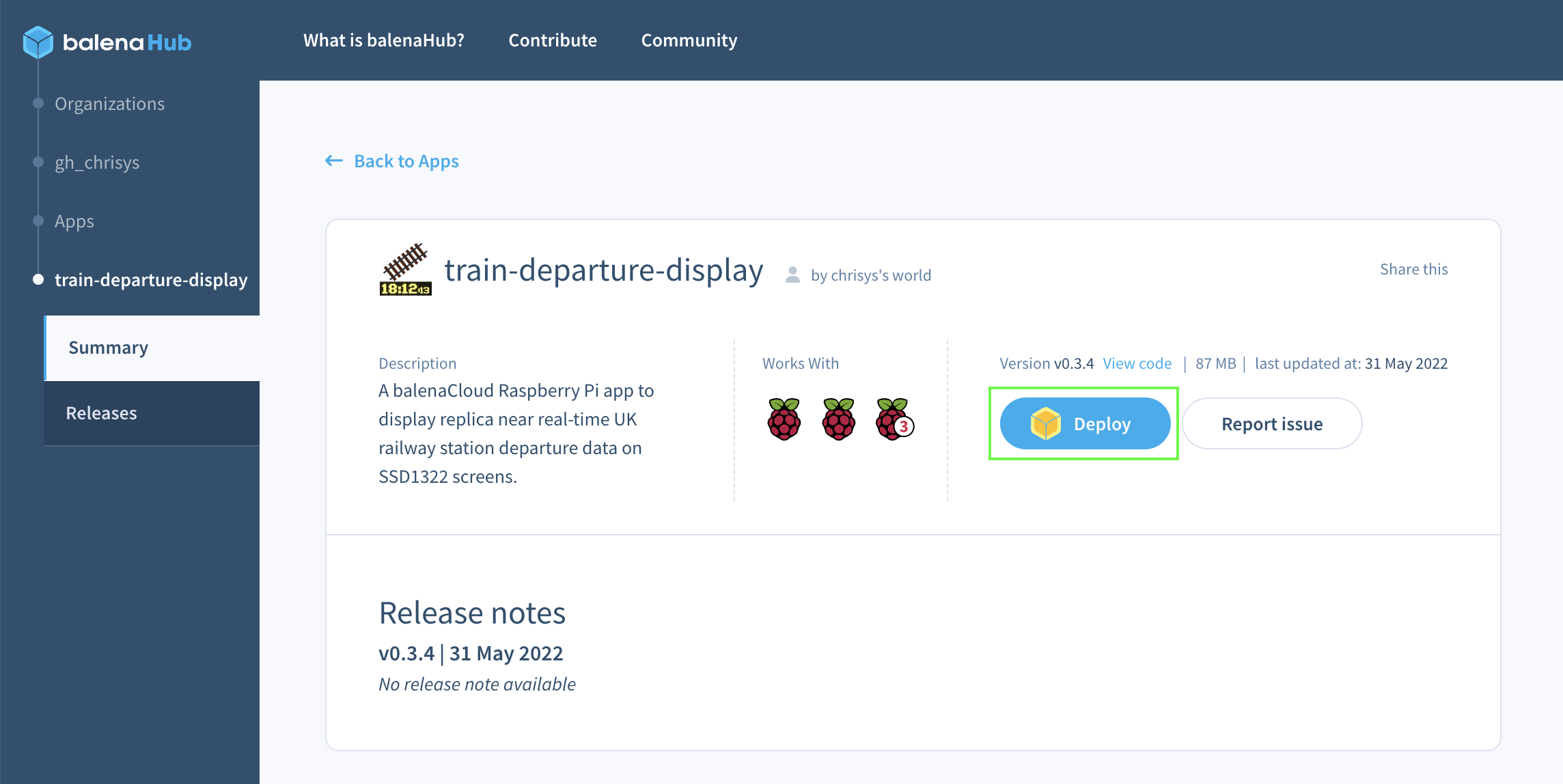 When the deploy button on balenaHub is used, the balenaCloud builder will fetch the latest source from the linked GitHub repository and create a new build for the chosen fleet. This process uses the Deploy with balena workflow in order to guide users through the process of creating/signing in to a balenaCloud account, creating a fleet and deploying the App.

If you require assistance with an App and have contacted balena for support, agents may ask you to ‘enable support access’ for the App. This can be achieved via toggling the Support access setting, found within the settings page to on.

Once enabled, for security reasons, the support access toggle will revert back to ‘off’ at the time specified.

An App can be pinned to a specific release which will control which release is used to display content on balenaHub. Note that when a user deploys an app, the latest code is pulled from Github and is independent of this setting.

Apps with all their associated releases and members can be transferred to any other balenaCloud organization. App transfers are between a source and a target organization.

Note: If the dropdown for the destination organization is empty and grayed out, ensure that you have created an empty App in the target organization with the same name as the source App, and that the user that is transferring ownership of the App from the source organization has been added as a Developer to the target App.

The functionality for Apps we have today is only the start. Apps added via the dashboard can be shared on balenaHub for others to deploy to their own fleets which serves to help others, and we’ll continue building out to expand to installing private Apps on private fleets, automatic updates, and eventually the ability to install multiple Apps on a single fleet. Keep an eye on our blog for all the latest news.